A busy few weeks in Property

This week has been a relief and a step forward on many fronts.

Relief that the temporary repairs and fettling to JJ Farms (See pictures and last taken this week) was completed just in time for Race Traffic to start and our full season opening.  Additional relief I was just able to make it back from Swansea through freak blizzards on Wednesday to see the second late afternoon race empties make its way across the bridge at line speed towards Cheltenham without the need for the speed restriction we had in place before Christmas.

Step forward as Malcolm has mentioned in we are working on some really positive developments which will move us in not just the Broadway direction but on to Honeybourne - they remain low key for the moment while discussions continue.

Step forward on the basis of positive working relationship and correspondence on routing of at least one local companies high road vehicles away from Laverton (not that they hit the bridge..but there was only an inch or two in it.) And then continuing discussions with Highways on flooding, drainage and road issues and improvements in general.

The team continue to do a fantastic job, having got the stations presentable for the opening, refurb of the Flag and Whistle and the additional unseen drainage improvements through a horrendously cold and wet winter progressed by a new very small dedicated team and their machines. Culverts, lineside drainage and ditches, as well as finishing off and tying in with the contract repairs at Cheltenham.

Other things progressed over the last couple of weeks, archive 1900’s construction drawings
found for details for ‘replanting’ one of two possible bridges that could come to Broadway (or the drawings used for new build), and being greatly supported by Our newly appointed Civil Engineer Peter Muir, who has taken on a huge amount of work from me and allowed me to work on other tasks which were on the list of things to do.

Still the a week off work ill meant I had a few extra hours with our Daughter Maya instead of just her being with the grandparents whilst my wife works part of the week. Much to their shock (In Laws and Out laws) who are run off their feet normally looking after her as she is a little ball of energy, with me convalescing Maya sat with her Daddy like a little angel concentrating with frown 45 minutes at a time watching DVD's such as ‘Carry on Clagging’ Steam Addition's and a whole host of other railway programmes - she's hooked on trains - waves as they go by on the screen but hasn't quite worked out where they disappear to once they have 'fallen' off the screen. At 15 months can mimic a class 47/57's horn! That's my girl.

Back at work and whilst on site at Swansea, meetings at Swindon and back in the office at Paddington one of the Engineers I was working with belongs to the Hagley Hall group on SVR and has also visited our railway regularly, I was able to get a new member sign up confirmed by colleague at work and had more discussions with different NR teams on further Company Charity team working days on the GWR......and have passed the strange site of the Ffestiniog railway display of one of their locos ‘Princess’ on one of the platforms at Paddington station......its been a quiet couple of weeks! 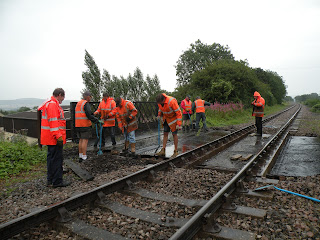 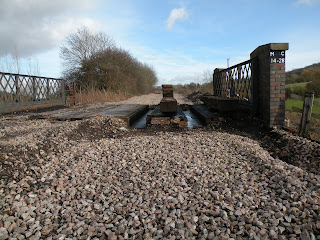 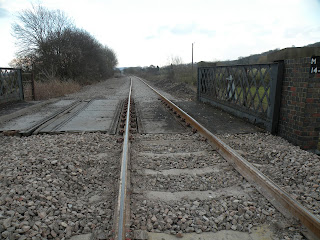 Darren Fairley
Posted by GWR Board Room Blog at 23:31