Broadway Car Park - some answers to your questions

Dear Fellow Supporters of the GWSR,

I am pleased to say that the correspondence I have received, both here on the blog and by email, about the car park is overwhelmingly positive.

Several important points have been raised by a number of you, so here goes with a general reply;

1. The railway's right to vehicular access on the west side of the embankment just south of Broadway Station bridge will be retained and available to the GWSR at all times.
2. The car park will be for 99 cars (2 disabled spaces), the part nearest the station will be tarmac and the further part chippings, like Wychavon's Childswickham Road car park.
3. The council have budgetted £650,000 for the car park's construction and they plan to have it open in August 2018.
4. The contract with Wychavon will require that the use of the land by Wychavon may only be for car parking.

I trust the above covers certain legitimate concerns raised which, for clarity, I had left out of my original post.

Thanks for your comments.

Chris Bristow
Posted by GWR Board Room Blog at 10:02 8 comments:

GWSR has another record year in 2017!

Gloucestershire Warwickshire Steam Railway has record year in 2017 – the fifth in a row!

Dear fellow GWSR Supporters,
Our railway had another record year in 2017 carrying slightly more passengers, 101,000, and earning more revenue, £1.7 million, than the previous records set in 2016. Passenger numbers would have been higher but for the loss of 3 operating days due to snow and ice over the Christmas period – the first operating days lost to wintry weather since 2010.
In fact, since the line was rejoined in 2012 after the landslips at Winchcombe, the railway has enjoyed 5 seasons of steadily increasing passenger numbers, revenue and operating profit. During this time volunteer numbers have grown to around 950 while salaried staff numbers have remained at 5. This year, as always, the  5 resident steam and 7 diesel locos performed excellently.
Some highlights of the year for me were the ‘Broadway – the last mile’ share issue which closed in April with share purchases and donations topping £1,330,000 about £80,000 more than our target amount. Great progress was made in the extension of the railway to Broadway  in order to meet the scheduled opening to the public on Good Friday, 30 March. Tracks were completed and the first train ran into Broadway station on 23 December 2017 an event much covered in the media – see photo. In addition, huge progress was made on the station site, including a new steel riveted roof structure replicating that at Toddington and fabricated in our steam loco department. 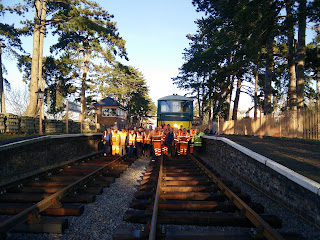 Equally exciting events occurred on the running line during the year, with the opening of the beautiful Hayles Abbey Halt in June, for which the railway was highly commended at the National Railway Heritage Awards. In October, the all new visitor centre, named the Tim Mitchell Building, in Winchcombe was opened in time for the Santa season. The building, which won an AVIVA community award in 2016, is designed in the style of the GWR goods shed at Ashburton and looks very much in place at Winchcombe.
Finally, the railway was delighted that Wychavon District Council have approved a new car park on railway land at Broadway, thus showing their support for the tourism the railway brings and easing the parking pressure in ‘the jewel of the Cotswolds’.
Turning to 2018, there is much to look forward to! With Broadway opening on Good Friday, the railway will be operating over a 15 mile route and on many days will operate 3 rakes of 8 coaches to meet anticipated demand.
As you know, all of the railways profits are ploughed back into the infrastructure and, with the current phase of Broadway capital expenditure drawing to a close, the emphasis this year will be on the existing running line. Highlights of the major investment program are a new steam loco facility at Toddington, a Signal and Telegraph workshop and a carriage shed both at Winchcombe!
It promises to be a very exciting year on the GWSR, ‘the friendly line in the Cotswolds’, and I look forward with my fellow volunteers to welcoming you to the railway in 2018!

Posted by GWR Board Room Blog at 15:08 No comments:

I am delighted to be able to tell you that Wychavon District Council (Wychavon) approved the construction of a car park at Broadway at their executive meeting on Wednesday 10 January 2018. The funds were allocated to the project and the chief executive was given authority to acquire the land from us and build the car park. Privately I have been advised that it should be open by August 2018.
The details of the deal we have done with them are straightforward; we transfer the ownership of the land on the west side of the railway between Broadway Road and Childswickham Road to Wychavon and they build a car park for which they receive the income from parking fees. The board has agreed that part of the cost of parking will be refunded to our passengers who commence their journey at Broadway.
Although I realize that giving up assets, land in this case, can be controversial, the GWSR board felt that, as the railway have neither the funds to build a car park nor the expertise to manage the planning and highways approval processes, it was therefore decided that this was the pragmatic way to proceed with this part of the Broadway extension project – I do hope you all agree.

You may well be interested to view the Wychavon meeting and, in particular, car park decision by clicking on Wychavon.public-i.tv. The session relevant to us starts at the 27th minute. What I think you will find remarkable and gratifying is the overwhelming support the various Wychavon council members give to the railway, their recognition of our contribution to tourism and their desire to work with us in the future. To my mind the support of local authorities and communities is vital to our railway’s long term success.

Some figures to make this a Happy new Year

In my November report to the Board,  I said  “Unless things go awry between now and the end of the year, we should at least match  our record final total of passenger numbers in 2016.

Well, we all know what happened weatherwise! The bad news is that things did go awry with a cancelled santa day due to snow (resulting in losing over 1000 passengers and income at £16 per person) and two cancelled days after Christmas due to localised snow and ice and atrocious weather for the remainder of the season. However the good news is  that even allowing for this, the final number of visitors  to the railway during the 2017 season was 100,619 which beats last years total of 100,020.

This is a tremendous result - one every volunteer should be proud of. And if any of us have any doubts, take a look at Tripadvisor.  ok we get occasional negative comments as does every heritage railway and tourist attraction,  but the picture is clearly of a strong well run railway.

Happy new year to everyone - roll on March!

Posted by GWR Board Room Blog at 11:23 No comments: