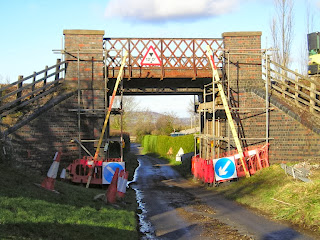 Work to replace the badly corroded half of this
bridge, which carries the running line, commenced on Monday 13th January 2014. The first photo shows the scaffolding and traffic signs in place on Saturday 1th January 2014, before starting any work. 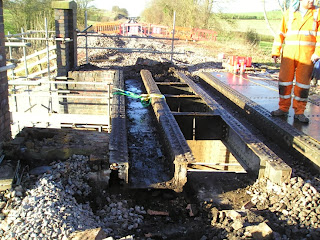 By late Monday morning both lattice parapets, the deck plates to the cess and in the 4 foot had all gone.


Slings have been attached to the first main beam ready for it to be lifted out.


The photo bottom left shows the first beam just lifted off the padstones. The second photo shows it being lowered clear of the walls 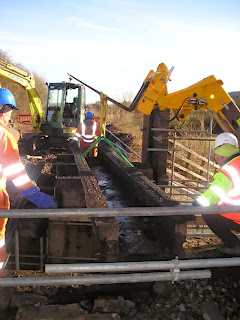 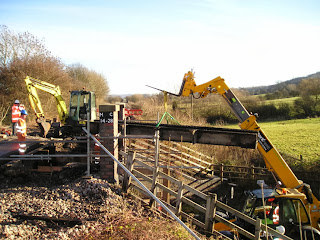 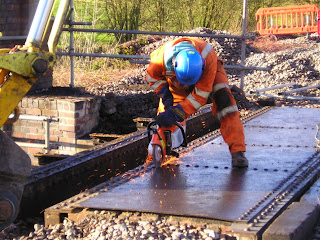 The next operation was to cut through the deck
plate in the 6ft, leaving it ready to be attached to
the new steelwork. The photo shows the plate
being disc cut.

A temporary support beam had to be inserted
beneath the 6ft plate to stop it distorting and to
keep it at the right level to fit on the new steel
when it is installed, as shown in the photo below.
A similar temporary beam has been installed above
the north edge to support the cut edge of the cess plate,
where the supporting parapet steel had been removed. 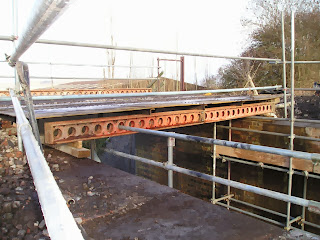 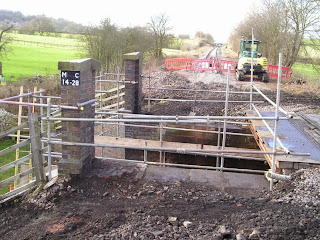 The next photo shows a view of the
bridge with the entire deck removed.
The work took 2½ days.


Note the existing brick pilasters
have remained undamaged despite
their close proximity to the
steelwork being removed. 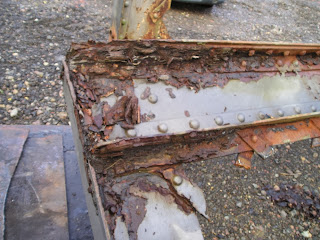 The reason for this work are basically
because the steelwork was badly
corroded,as the following photos show.


This is the bottom edge of the Parapet
steelwork, after removal. How it
stayed in place is a mystery! 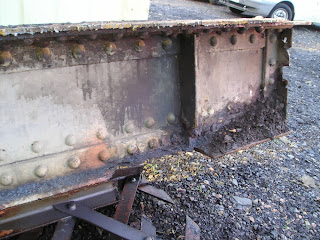 This photo (right) shows bottom flange
corrosion of one of the main beams
where a length of app. 350mm has "disappeared", together with
notch where corrosion has eaten
away a 100mm high section of the
main load bearing stiffener at the
point which provides the main load
carrying support to the bridge.
Note also that the end stiffener has
also suffered severe corrosion. 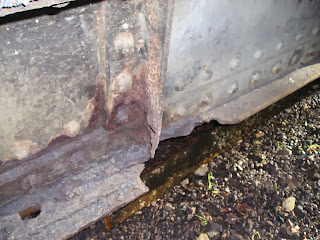 Further bottom flange corrosion and
rot to another of the main vertical load
bearing stiffeners.


John Balderstone
Posted by GWR Board Room Blog at 11:10