Dear Supporters of the railway,

I hope you are all well.

It is some time since I last updated you on the share issue. Although income has slowed down as expected, I don't think there's been a single day when we haven't had requests for shares or donations for Broadway to the GWRT and the total now stands at more than £880,000.

I always felt if we could get more than £900,000 by Christmas (surely now almost certain) we should be able to ask our supporters to finish the funding in the New Year in the time leading up to the share issue close on 30 April.

So, all good news on fund raising and many thanks to all those who have so generously contributed!

You will be pleased to know that all 3 deliveries of rail from British Steel have been laid and welded as planned. All the bottom ballast is in place up to Peasebrook Farm from where the station site is clearly discernible and looks tantalizingly close!

Things go on apace at the Broadway site and our plan is to open the line and the station towards the end of March 2018 with the first timetabled trains on Good Friday 30 March 2018!

I was out on the line the other day and caught the permanent way train at Little Buckland bridge simmering in the sunshine - all looked very professional with the ballast, sleeper and rail wagons.

The current Permanent Way works are bringing the line across the Gloucestershire Worcestershire boundary (for the first time since 1979) and we are about to report this in the railway press and media.

Other than that, I'm pleased to tell you that the railway has had another excellent, probably new record, operating season. Yesterday was the last normal operating day and the only trains in November will be for the Cheltenham races. Then we are onto the Santa trains in December for which bookings are currently running 15% ahead of this time last year. It's all go! 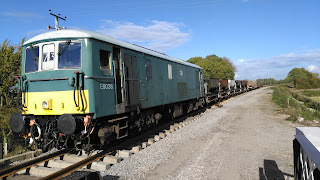