Passenger numbers to the end of July

You will I am sure be interested to know that as at the end of July, we saw almost 72,000 passengers (not including the race trains, fire and drive and evening specials.) This compares with just over 46,500 at the same point last year. So, we are up 54% year on year.

Looking at our special weekends,  all have been extremely successful with significant increases on previous years. As reported earlier, the wartime weekend was up 11%, the steam gala 66%, real ale weekend 69%, the bus rally 10% and so it goes on. The recent diesel gala was amazingly successful at a 28% increase when one considers the unbelievable weather that weekend! (One day I burnt and the next got soaked!)

The one event that has bucked the trend this year  was "Day out with Thomas" where visitor numbers were down. No one knows the reason for this but it seems families are less excited by Thomas than they were. Our final visit from Thomas will be in September so it will be interesting to see how numbers stack up that weekend.

That's the good news! It means we are able to rebuild our reserves that were seriously depleted by our opening to Broadway at Easter and look at a number of important maintenance and development projects.

However along with the good news I want to remind everyone that this is a mostly volunteer run railway - something a large number of our passengers don't realise. It can only be successful if we continue to provide a rewarding hobby for our 950 volunteers - we must all want to come to the railway! As we start to plan next year's timetable we will be taking account  the many concerns volunteers are now expressing so that we can continue to be the "Friendly Line." Please don't expect any increase in services!

Visitor numbers to the end of May

The massive increase in visitor numbers since we opened to Broadway  shows how important this extension is to our line, and is a reward to every volunteer who put in so much hard work to make it happen.
Overall, the total number of passengers who  travelled with us on service trains up to the end of May  has grown to over 40,000 as against 26,000 last year. The most spectacular increase was the May Day weekend where our numbers more than double last year's total.
April and May are always very busy months with not only our Wartime in the Cotswolds weekend, our bricks event, the real ale weekend  and most recently our fabulous  steam gala all of which produced record numbers of visitors.
What is clear from analysing the figures is that passengers are now, more than ever, using our railway to "get somewhere" rather than use it for a round trip. Just look at the numbers getting on at Toddington or Winchcombe who are travelling to Broadway for lunch and shopping and you can see what has changed.
As always, thanks are due to all the volunteers who not only made this happen but are now facing the "marauding masses" on a daily basis. We are going through exciting times
Colin Fewell
Commercial Director

Dear supporters of the GWSR,

It is sometime since I wrote to update you on progress at the railway but there is now much to say.

Firstly, the railway had a terrific financial year to 31 January 2018 with record passenger numbers at 101,000 and record turnover oft UKP1.7M. These figures have grown along with profits for 5 years in a row since the line was re-opened in 2012 after the land slip.

During last year steady progress was made toward opening the Broadway station, with the first train crossing the bridge and easing into the station for the first time in 58 years on 23rd December - a very nice Christmas present!

However, all 2017 activity feels like ancient history since so much has happened in the new operating season which commenced in March with the trains for the Cheltenham Festival.

We carried a record 3,000 passengers to the races which was slightly more than 1% of the 262,000 people who visited the race course! We had terrific publicity by carrying Chris Evans and his guests as part of his Children in Need appeal and, in fact, Chris will be repeating this event at next year's Gold Cup Day when we will also be putting on an extra train!

Then followed the low key but nevertheless exciting official opening to Broadway on Good Friday, 30 March, at which I expect many of you were present. Richard Faulkner cut the ribbon and then Foremarke Hall, in beautiful condition, headed off with the train full of passengers for Cheltenham for the first time in 58 years. Truly a great achievement after 10 years of work by our volunteers!

April saw our weekend Wartime in the Cotswold event grow significantly with more than 3500 attendees (2017 3100).

In May we had the biggest steam gala ever, far surpassing the records set for attendance and turnover in 2016. For the 3 days we had 4 guest engines and the added attraction of Broadway combined to attract 6000 passengers! Most trains were like the real railways with standing room only!

However, Broadway has also contributed to an enormous growth in our operations on regular timetabled days - comparing year on year so far, passenger numbers are up 57% and ticket revenue 74%! How many businesses are doing better than that?

All of the above have contributed to rebuilding the finances after our very extensive winter capital expenditure program which saw the completion for operations of  Broadway station, a new pumped sewage system at Toddington and the rebuilding of Bridge 34 at Gotherington.

The cash from operations has arrived just in time as, for the Board, the recent bridge strike at the Broadway bridge, where a lorry loaded with an agricultural baler crashed against the side of the bridge leaving the baler broken in half in the road, was the last straw (pun intended)! We have now ordered a bridge crash protection beam system for erection in August to protect this vital bridge from further damage by reckless drivers.

Also welcome is the steady progress by Wychavon, mostly behind the scenes, on the development of the car park on railway land adjacent to the Broadway station which we anticipate being open by the start of next season at the latest. I think the above passenger numbers show that the decision by Wychavon to invest in the car park in support of tourism was, indeed, a good decision.

That's probably enough superlatives from me - do please visit the railway often and, if possible, before the Blue King leaves in about a week!

Posted by GWR Board Room Blog at 09:22 No comments:

Wartime in the Cotswolds

Yet another record broken! A 10% increase in visitors this weekend which is remarkable considering the appalling weather. Lots of praise from everyone for what is clearly the leading Wartime experience locally. And with Broadway getting involved this year, there is more to come in the future - but hopefully under blue skies
Colin Fewell 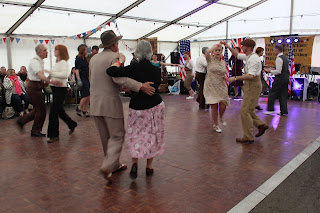 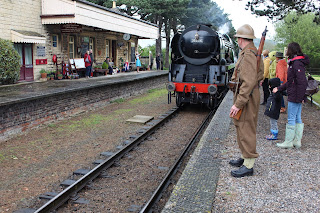 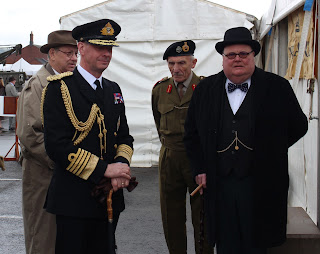 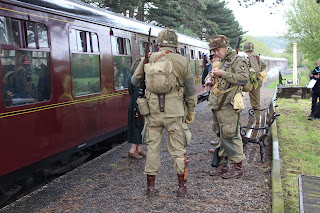 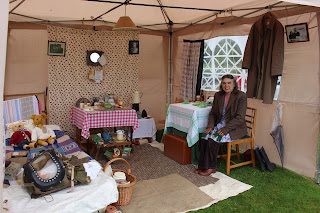 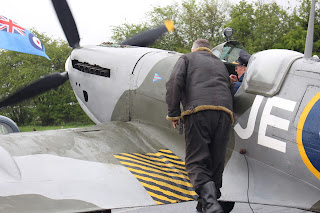 The start of the asparagus season is very important to the Vale of Evesham and they celebrate it in style. This year they chose our railway to take the first spears to Cheltenham to present to Edward Gillespie and the Riding for the Disabled. The day started for many with breakfast at the FAleece at Bretforton then a ride in Morgan cars to Broadway Station from where they travelled - many of them slightly inebriated - to Cheltenham Racecourse. A good time was had by all as these photos show.
Colin Fewell 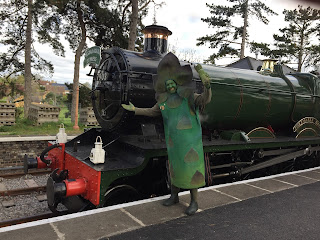 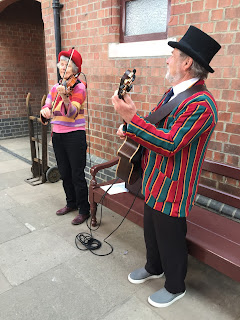 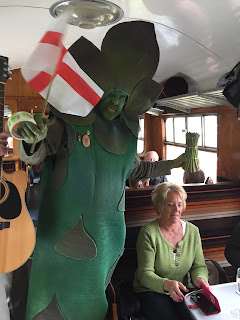 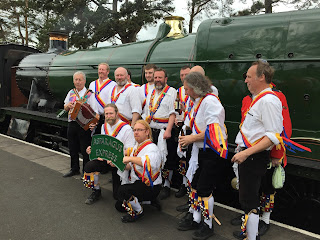 Posted by GWR Board Room Blog at 14:12 No comments:

Watch Midlands Today this evening for a report
Colin Fewell
Posted by GWR Board Room Blog at 17:47 No comments:

After a very exhausting few months, and a particularly exhausting Easter weekend, I can report that our opening to Broadway was a tremendous success. We were very worried about overcrowding on the platforms and on our trains and had numerous meetings to plan for the "worst" where we might even have to close down stations. However the Great British weather intervened and passenger numbers were absolutely at the right level - roughly 1000 people a day. And with trains every hour and one extra carriage on two of our sets, everyone could be seated comfortably. I heard no negative comments from anyone, nothing but praise about our friendliness, the quality of our locos and rolling stock and most importantly the work done to (almost) complete Broadway Station. There is no doubt that  the goodwill generated by everyone, and I do mean everyone,  this weekend will put us in a great position for the future. And if anyone has doubts, have a look on social media!
A great weekend
Colin Fewell
Commercial Director
Posted by GWR Board Room Blog at 11:49 3 comments:

View my complete profile
If you have any longer comments or questions to pose as a result of this blog you can email the chairman at chairman@gwsr.com.